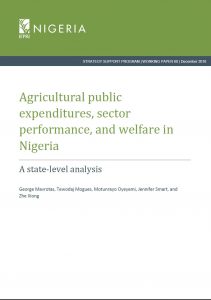 The paper is part of the research output emanating from the Feed the Future Nigeria Agricultural Policy Project. The project is jointly implemented by IFPRI’s Nigeria Strategy Support Program (IFPRI-NSSP) and Michigan State University with funding from the United States Agency for International Development (USAID/Nigeria).