The main research findings that were discussed are that there are sufficient differences in price behavior across markets in Kebbi state to justify a statewide analysis, and that these differences are likely related to the physical characteristics of markets, such as the availability of storage and mobile networks. These findings are likely to be of great interest to state and local agricultural policymakers, since directing their attention toward market modernization can plausibly improve the general business climate in the near term.

The seminar was attended by 226 people, including local dignitaries such as His Excellency, Senator Abubakar Atiku Bagudu, the Executive Governor of Kebbi state, and Professor Barshar Ladan Aliero, Vice Chancellor of KSUSTA, as well as traders and farmers from throughout the state.

In his comments after Dr. Hatzenbuehler’s presentation, Executive Governor Bagudu said that he greatly appreciated the aims of the research and described several exciting recent developments in the Kebbi state agricultural sector. One notable example the governor provided was that of a state government loan to the local government of Aliero, where KSUSTA is located, which it used to invest in improved infrastructure in its onion market. The governor mentioned that this investment has greatly improved the business environment for onion traders in the area, and that they are making money as a result. This example of how investment in physical infrastructure of markets can improve marketing conditions is exactly what the presented research advocates, especially in the most isolated, rural markets. Based on these comments from the governor, dissemination activities will target local government authorities throughout the state to promote market modernization to improve local business conditions. 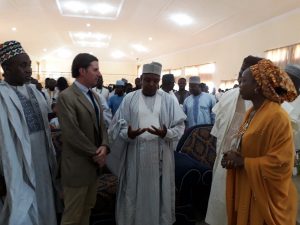 The Governor of Kebbi State, discussing with IFPRI’s Patrick Hatzenbuehler and Amina Bashir after the presentation of the paper in Kebbi State University in July 2018

The presented research is described in further detail in NSSP Working Paper 51 and NSSP Policy Note 47. All activities described were conducted with the support of United States Agency for International Development (USAID) and in connection with the Feed the Future Nigeria Agricultural Policy Project, a program jointly implemented by IFPRI’s Nigeria Strategy Support Program (NSSP) and Michigan State University.