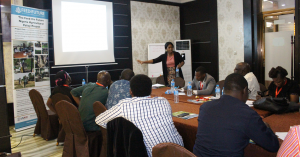 On 30-31 July, the International Food Policy Research Institute (IFPRI) organized a second training for members of the National Assembly Press Corps in Abuja, further building on efforts towards strengthening the policymaking environment for agriculture in Nigeria.

The training, which was attended by 14 (9 male and 5 female) journalists, built on the first training held in January 2018 and covered aspects such as strategizing and planning communications and the use of online platforms, including social and other digital media. 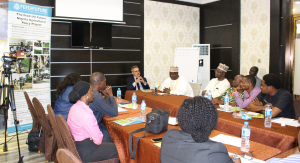 Dr Aliyu Sabi Abdullahi, Chairman of the Senate Committee on Media and Publicity, making his remarks at the end of the second policy communications training for members of the National Assembly Press Corps in Abuja (c) 2018 IFPRI/Bisola Oyediran

The training was officially closed by Dr. George Mavrotas, Head of the IFPRI Abuja Office and Distinguished Senator Dr. Aliyu Sabi Abdullahi, currently serving as Senator in Nigeria’s Eighth Senate and Chairman of the Senate Committee on Media and Public Affairs.

According to Senator Abdullahi, “Once again, I would like to appreciate the International Food Policy Research Institute (IFPRI) Nigeria Office led by Dr. George Mavrotas that graciously facilitated this training programme. Your foresight and devotion for this training is well recognized. It is my hope that this robust relationship will continue to yield more dividends…finally let me once again place on record the role of the Director-General of IFPRI, Dr. Shenggen Fan, who ensured that he walked his talk based on our discussion during his visit to my office on July 20th, 2017. His visit and commitment made the first and second phase of these trainings a reality.”

Speaking to the Senate Press Corps, Senator Abdullahi said “I would equally like to congratulate the participants, our press crew for availing yourselves of this opportunity which is the first of its kind in the life of the Senate media relations in which training is being conducted by an international organization. I urge you to make judicious use of this opportunity.” 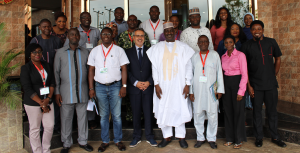 The training was well-received, with the journalists committing to apply the newly acquired knowledge and skills. Nneka Amaechi-Nnadi, a journalist with The Tide declared that ..”I must say that from the depth of our hearts, we are thanking you for this great opportunity you have given us. I must say that we have been equipped more and more to do this job… and you have equipped us with all we need to go out there and do our work as media persons. I also want to use the opportunity to assure you that the training you have given us is going to yield great rewards.”

The training is part of the activities of the Feed the Future Nigeria Agricultural Policy Project, which is jointly implemented by IFPRI’s Nigeria Strategy Support Program (IFPRI-NSSP) and Michigan State University with funding from the United States Agency for International Development (USAID/Nigeria).